My heart often sinks when “the movies” decide to do a story of love across the racial divide. Too often the result is melodrama overplaying relatively unimportant differences (like skin colour) while underplaying the ones that do matter (ie culture). See Ken Loach’s Ae Fond Kiss, for example. Or, from the other end of the spectrum, the buffoonery of My Big Fat Greek Wedding. Director Dominic Savage’s Love + Hate manages to avoid these pitfalls. It’s a “nice Asian girl meets racist white boy” story set in a town in Northern England and is Romeo and Juliet on a shoestring.

At the Asian end of the relationship there’s the male/female double standards in an Muslim Asian household where the brother is allowed to go out wherever he wants but the sister isn’t. On top of that is the fact that the brother is appalled that his sister is seeing a white boy but doesn’t think it’s so awful that he’s been seeing a white girl. Meanwhile, their white counterparts are a scarily racist family who see Asians as a threat and applaud their son’s forays into ultraviolence against their brown-skinned neighbours.

So far, so stereotypical. What gives Love + Hate a kick up the rankings is that the plot has been worked at until it dovetails together with a craftsman’s precision. If it strains credulity that the father of Person A is working with Person B, the daughter of whom works with the sister of Person B, who is the… I lost the plot, to be honest, but the film doesn’t. And it’s a small town, so maybe everyone would be vaguely in bed with each other without knowing.

Second plus is the acting, wildly variable but bracing. The cast are mostly non-actors and they’re all largely improvising. Which does make you realise how much work Mike Leigh puts into his similarly improvised dramas. But where Love + Hate does really well is in its Juliet aka Naseema (aka first time actress Samina Awan) who can be a star if she wants to be and has the sort of skin and bone structure that cameras love.

Though it struggles to get to the magic 90 minutes and wanders into melodramatic water towards the end, Love + Hate has heart and passion, does manage to say some interesting things about being a Muslim in a post 9/11 world and paints a picture of cultures whose conflicts can be resolved, but not always in easy-peasy fashion. 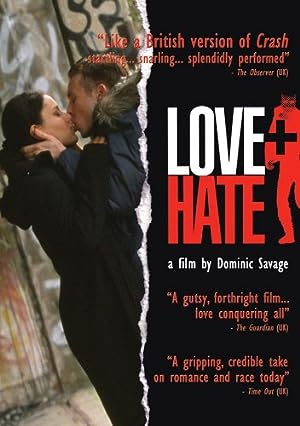 Love + Hate (2005)
86 min|Drama|05 May 2006
6.9Rating: 6.9 / 10 from 566 usersMetascore: N/A
Adam has grown up in a racial prejudiced community. Naseema belongs to a generation of Asian youth who have taken up violence. They want to break free of the small town inhibitions and ...
Director: Dominic Savage
Creator: Dominic Savage
Actors: Tracy Brabin, Mohammed Rafique, Miriam Ali, Dean Andrews