Christopher Lee! Christopher Lee of Dracula fame, intelligence operations during the Second World War, later a Bond villain, Saruman of Lord of the Rings and a heavy metal artist in his 90s, yes, that’s the man, lumbering about like Frankenstein’s monster (another role) the first time we see him, and shot from below, again Frankenstein-style, by director Robert Day as this episode of The Avengers kicks off with a car accident which renders the guest star dead.

Surely not? Surely so. But this episode isn’t called Never, Never Say Die for no reason, and no sooner has he been pronounced dead by a doctor at the hospital than he rises again, to the sound of the sort of boom-boom-booming music you associate with a Roman slave galley. Only to be knocked down and killed again on the way home, by the same car and driver. And only to break out of the ambulance (or was it?) he’s been put into.

A case for Steed and Peel, obviously. But not before we’ve seen this violent unkillable man wreaking havoc with a succession of innocents either pulled from the mind of writer Philip Levene directly, or embroidered by script editor Brian Clemens, or possibly thrown in for Avengers-style flavour by director Robert Day, who by now knows what sort of tone the show is aiming for.

First a man lying on the grass eating a banana (the comedy comestible), then an old duffer (played by Arnold Ridley, later of Dad’s Army) in an admiral’s hat playing with a toy boat. Lumbering, silent Professor Stone (Lee) making short work of both of them. No actual dialogue as yet – nice work if you can get it.

It seems to be the weekend, since Steed is wearing brown shoes, is sporting a brown bowler and is attired in tweedy twill of some sort when he arrives at Professor Stone’s house, only to be beaten to it by the same ambulance we’ve seen before, and off the Prof is bundled to the Neoteric Research Unit run by the Ministry of Technology, a facility devoted to futuristic tech stuff that is so out there that its access procedure requires visitors to run their plastic ID cards through two levels of security. Fancy!

Mrs Peel, meanwhile, has arrived at the house of Mr Eccles, a radio ham and chess nut whose name was found at the home of Prof Stone (why this name and no other was of interest is a typical bit of can’t-be-arsed scripting). Eccles is playing multiple games of chess with opponents all around the world, and changing his accent according to their nationality.

While Peel makes eyes at Eccles in an attempt to loosen him up, Steed is laying on the professional bonhomie with Stone back at the unit, where radio waves seem to be part of the mystery.

No, it has not dated well, since this idea has been done to death in the decades since, but it was a fresh idea at the time, and it is a neatly written episode that’s also been tightly directed. Worth noticing, apart from how easy this must have been for Lee to do – he lumbers and does little else – is how well directed the fights are. There’s an early tussle between Steed and Stone during which Steed (I mean Macnee’s body double) is launched very convincingly across a room by Stone (Lee’s body double, though it could be Lee himself). And the later fights are also well choreographed and have much more convincing heft than we’re used to.

Physicality to one side, stick this one in the box marked “the scary modern age we live in”. 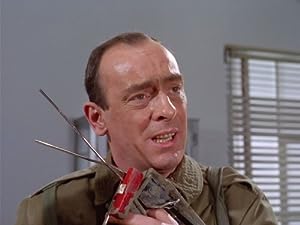