Film of the Day - Antiviral This day every leap year is Rare Disease Day. Initially chosen because the day itself is rare, and to commemorate the 25th anniversary of the Orphan Drug Act in the USA (which makes it easier for therapies for designated diseases to be developed), it was first observed in 2008. When there isn’t a 29 February in the year, the day is observed on the last day of the month. A rare disease is technically defined as one found in fewer than five people in 10,000, but there are more well known rare diseases than might at first be thought – cystic fibrosis, conjoined twins, Creutzfeld Jakob disease to name three beginning with the letter C. The day is largely used to raise awareness and increase access to facilities and treatment, but is also seen as an opportunity for lobbying and fund-raising. The organisation’s website is at www.rarediseaseday.org

Meet Syd. He works at a strange medical facility which deals in celebrity infections. Not the curing of infections that celebrities have, but the culturing and selling on of infections – herpes seems to be a favourite – which a particular celebrity has had, the idea being that the adoring fan will buy anything, and especially something so intimately connected with fame. So that’s Syd’s job – selling famous people’s diseases. He’s at the fragrant high end of a market which, lower down the pecking order, deals in cloned celebrity muscle tissue, offered up on the black market at a handsome price to the fanbase. They eat it, apparently. In films where the “hero” works in some highly mechanised and not particularly savoury occupation, at some point he generally makes a break for it, or sets about bringing about a revolution. Syd does neither. Instead he sneaks some infection home from work inside his own bloodstream, with the intention of either doing some black market trading, or having his own private facetime with a celebrity virus, we’re not sure at first. But Syd’s theft has consequences, and he’s soon fighting the very thing that other people are fighting to get.
The time is the near future; the place is a sort of aseptic steampunk version of the present; the influences are the dystopia of Stanley Kubrick’s A Clockwork Orange and the body horror of David Cronenberg. And the director is Cronenberg’s son, Brandon, who could be accused of having cloned his dad’s sensibility, if we were being cruel. I suspect that Cronenberg Sr had some ancillary input in Antiviral – the technical work, the mis en scene, and the support cast are all perfect – but there is more going on here than Mini-Me horror. Cronenberg Jr builds a convincing universe, uses his cast well (Caleb Landry Jones as the pasty salesman/technician/thief; Malcolm McDowell affirming the Kubrick connection; Sarah Gadon blonde and charismatic as the Madonna/Gaga-esque star the plot hinges on). Brandon Cronenberg also has his own vision, tells his own story and follows his theme of vampiric celebrity culture – they live on us, though fans believe it’s the opposite – through to its pitiless satirical conclusion (OK, that last bit is definitely the father’s style too). More importantly, he fuses the clean-tech high modernist sci-fi look – the opening shot is of a white light and white is the key colour throughout – with something much more organic, wet, dark, even hairy. Enjoy. 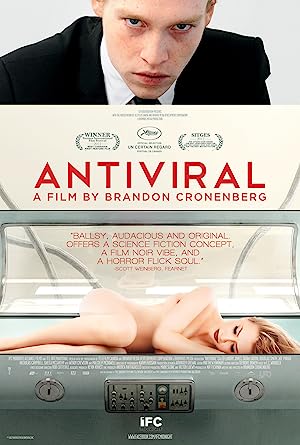