Gypo is a Dogme film, the 37th made according to the strictures of the protocol dreamt up by a group of Scandinavian film-makers, including Lars Von Trier and Thomas Vinterberg, in 1995. Naturalism is the stated idea, but Dogme could also be seen as an extension of Ikea flatpack design principles into film-making, or those of no-smells, no-bells Nordic Protestantism, or the “form follows function” of the Bauhaus, or fellow Scandinavian Carl Theodor Dreyer’s spare aesthetic. Take your pick.

What’s unusual about Gypo is that it is a British film, a kitchen-sinker set in the bleak coastal town of Margate. It tells the story from three different angles of a mother/daughter pair of Romany refugees interacting with a British family, in what used to be called the Rashomon style. What truth? Whose truth?

Key among these viewpoints are those of a married couple – played with daggy realism by Pauline McLynn and Paul McGann. And how their stalled, frustrated relationship is put under strain by Tasha (Chloe Sirene), the younger of the Romany women (Rula Lenska plays the other one, the mother). If I mention that Sirene is around 22 and pretty and that McGann is around 45… the dots barely need joining up.

McGann and McLynn both have form – he as a solid jobbing actor on TV and various films who seems to have deliberately steered himself away from the big time every time his career has headed that way; McLynn is best known for playing the tea-dispensing housekeeper Mrs Doyle in the TV series Father Ted. Sirene I’ve never seen before, and I was surprised to see she’s a London girl, not an east European. She’s good.

We’re in capable hands, in other words. Director Jan Dunn clearly inspires confidence – this is her feature debut – and it’s repaid by performances of an intensity that fits a story about relationships being subjected to extreme stress-testing and lives teetering on the brink of great change. For McGann’s angry, racist Paul it’s shit or bust time in a career that’s run aground; for McLynn’s Helen it’s the chance to break free of a life of drudgery with a thankless husband; for Sirene it’s altogether more positive – she’s younger and got more time to play with. But, waiting for a British passport, she’s in limbo like the other two.

Dunn seems determined to stick to the Dogme dogma. Do other directors really not edit out or redo fluffed lines? There are a couple. And there’s the suspicion that the Dogme edicts are beginning to stifle rather than liberate – surely not the guiding idea behind that original 1995 manifesto.

But Dunn, McGann, McLynn and Sirene rise above these limitations. At first it looks as if we’re in for one of those dour, ranting British realist films with a joyless yet sentimental depiction of working class life – “we woz poor but we woz ’appy” – but that’s not what Dunn delivers. And as the McLynn/McGann relationship breaks down and McGann turns up the cold contempt – and doesn’t he do it well? – Dunn also allays the fear that she’s going to go redemptive, Billy Elliott style.

Gypo doesn’t take the easy way out. It’s an expertly made, brilliantly played and deeply unpleasant drama that sticks to its guns. In the current climate that’s highly refreshing.

Gypo – Watch it/buy it at Amazon 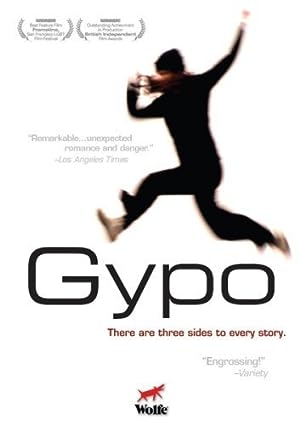