Mrs Gale takes a rest and Venus Smith gets another outing in an episode set at an elite Oxbridge-style university and kicking off with a death (again) before the credits (again).

Steed is sent in to find out what happened to the man he was meant to have been keeping an eye on, after a briefing from a different control, One-Seven (Frederick Farley), a ridiculous throwback complete with cigarette holder and winged collar.

A much chattier, gamine Venus Smith is introduced early on. Smith just happens to be gigging at the university’s rag week, which is handy for Steed, who has soon also inveigled his way into the grove of academe and is chatting away to a young academic (John Standing) and gently pumping him for intel over a game of bar billiards at the local pub.

The story soon resolves itself into something familiar and something that’s actually rather hot-button. In the familiar corner we have a distant cousin of The Browning Version – scholastic shenanigans, hooky cash and honour besmirched – revolving around Green (Terence Woodfield), a working class student caught up in a money-lending racket. And in the hot-button corner – and this is why the episode is called School for Traitors – a story about the recruiting of spies at a prestigious university, spies who would go on to progress to the very uppermost echelons of the British Establishment. Given that Kim Philby, one of the Cambridge Five group of spies, had just fled to Russia, a fact that wouldn’t be confirmed until some months after this episode was transmitted in February 1963, writer James Mitchell either took a punt on a rumour, or was just very lucky. But then he was something of a spy expert and went on to write a good chunk of the excellent TV series Callan.

The two strands – money and spying – are tied together by blackmail, the luckless student caught out by the money-lending scam being brought into the spying fold by the promise of his debts being wiped out. This is all organised by local pub landlord Higby, played here by Reginald Marsh, a brilliant actor who often did comedy but here reminds us what a great sinister presence he could be when he wanted to be.

Talking of which, John Standing, only three years into a screen career, looks entirely at home on screen, playing a variation of the posh charmer on which he’d build a career, here suggesting his character is a lot brighter than he’s letting on.

And it seems the producers have worked out what to do with Julie Stevens, making Venus Smith a lot more garrulous, perhaps a version of the stereotyped silly young woman, but a self-possessed modern, 1960s one rather than the vampish 1950s-ish coquette she started out being. If Smith’s character is a bit implausible – a nightclub singer and part-time spy – Stevens is nevertheless rather good at both variations, though the modern version is a better foil for Steed, and useful in terms of explication.

Class is a concern – as it would be in Callan, a spy series in which Edward Woodward played a chippy working class spy in a toff’s world – and without giving away too much, let’s just say that the working class characters tend towards the good, and the higher up in status we go, the more rotten it gets. 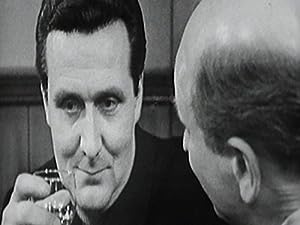